This year IMTE-Master-Students presented their research at the ENTER Conference in Rome. Here is an extended abstract of what they did and what they found out…. 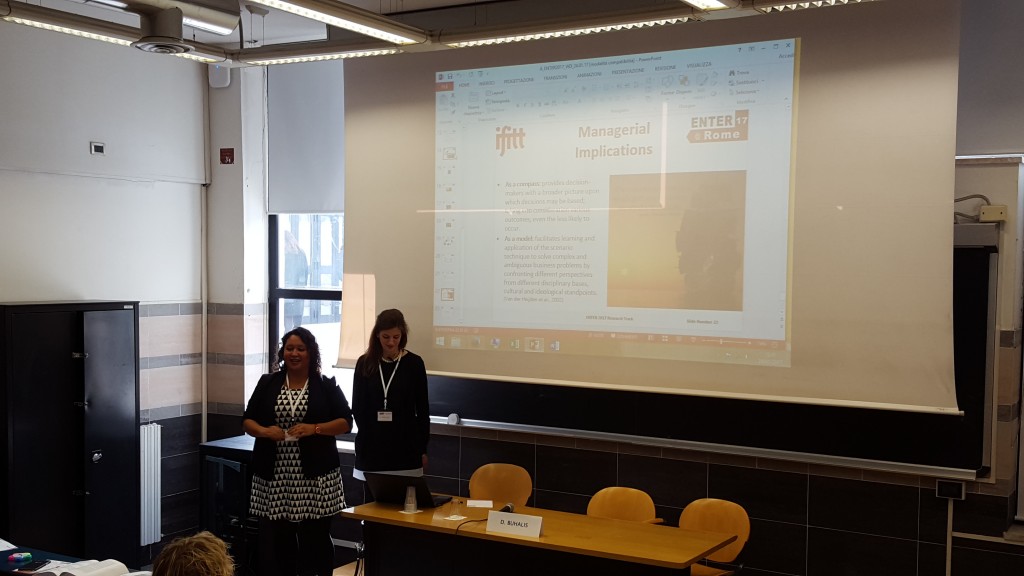 This study is the first of its kind to apply the scenario technique approach to explore the future of wearable technologies in tourism. Nowadays, mobile devices have become central in the tourism industry, addressing not only the inspiration and planning stage, but also the experience on-site (Neuhofer, Buhalis, & Ladkin, 2014). Recently a new form of technology has emerged in tourism: wearable devices. This technology is expected to have an effect on how tourists would look, communicate and interact with their environment in the future, mediating their experience by facilitating practical functions such as communication, navigation, information search and health monitoring (Tussyadiah, 2013). Although they are not claimed to replace smartphones any time soon, wearables are considered to be the technology of the future that will transform the way people interact with the surroundings (Prabu, 2012; Dickey, 2013).

Given the changing roles wearables might play in the future of tourism, this research adopts the scenario technique approach to propose plausible and possible future scenarios of use of wearable devices on-site. As starting point of the Scenario technique approach, focus groups were conducted to gain an understanding of the core factors influencing the future use of wearable devices in an on-site tourism context. Software, Hardware, Network & Infrastructure, Comfort & Embodiment, Functions & Usages, Reliability and Third Party Access were identified as the most influential factors. Out of a vast number of possible scenarios generated combining all the future developments of the identified factors, four scenarios were chosen based on the most plausible and contrasting combinations of the most influential driving forces (Schüll & Schröter, 2013). The four scenarios, which are presented through narratives named as Awesome, Meh, Grumpy and Evil, depict not only why and how wearable devices such as smartglasses and smartwatches might be used in the near future by tourists on-site, but also outline how the visitor’s experience might be affected. While one scenario presents a situation where embracing technology enhances the tourist’s experience, hence maximising customer values and enriching user’s skills (Neuhofer et al. 2014; Tussyadiah, 2015), the other scenarios depict alternative situations where wearable devices fail to enable meaningful positive experiences.

Get a preview of the article here