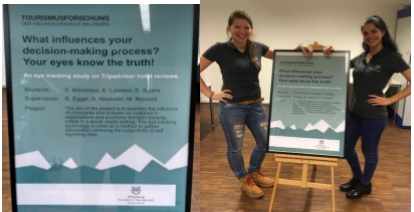 During the first semester of our master programme, we were divided into groups and assigned each a relevant topic about e-tourism. My group, represented by Erminio, Stanislava and I, Serena, chose the topic eye tracking and tourism marketing as we strongly believed that a deep research in this field would have been fascinating and could have brought answers to significant questions concerning the area.

By means of several meetings and profound thinking we developed the final idea: we decided to focus on the investigation of what catches the user’s attention while visiting a website. More precisely, we wanted to analyse whether people are more attracted by the pictures or the reviews as well as whether people were more influenced by negative or positive review prior booking.

Since our general topic was eye tracking applied in the tourism marketing, we selected a hotel page as a website, particularly on TripAdvisor. For those who are not yet familiar with the term eye tracking, an eye tracker is a device that allows to measure both eye positions and eye movement.

Based on the literature review, the research question was formulated as follows:

Is there any difference between the impact of positive and negative comments on the final consumer while accompanied by a picture of a hotel?

In order to answer the above research question, we formulated the following hypotheses:

H1: People pay more attention to the reviews than to the pictures.

H2: People remember more information from negative reviews than from positive ones.

H3: People are more influenced by reviews than pictures when booking a hotel room.

We implemented the usage of the eye tracking device together with a brief questionnaire. In such manner, we aimed to gather more consistent data since we were able to compare the results of what people were claiming to look at while visiting the webpage (questionnaire) with the results of what they were actually looking at (eye tracking). Also, looking at the answers given in the questionnaire, we managed to observe whether the participants would have booked or not booked the hotel and for what reasons.

We settled two pre -tests to improve the questionnaire and the scenario introducing the eye tracking test. Having two conferences held at the Salzburg University of Applied Sciences, we had the opportunity to test numerous participants, all selected randomly.

Finally, for the purpose of our research, we managed to have 39 relevant eye tracking records and related questionnaires. In order to analyse the data, we employed two statistical programs, namely Excel and Gretl.

Our final conclusions are the following:

people pay more attention to the pictures than to the reviews (H1 rejected);

people are more influenced by pictures than reviews when booking a hotel room (H3 rejected).

The results of this study underline the importance of the user generated content (any form of content created by the users) in shaping the consumer’s decision. Hoteliers should keep in mind that both pictures and reviews are important to obtain a positive online reputation.